Winner of the World’s Hardest Robotics Challenge Builds on ANYmal

The DARPA-funded Subterranean “SubT” robotics challenge has set out to revolutionize the operation in the underground domain. Eight world-leading robotics teams have been competing during the finals in Louisville, Kentucky to deploy the most performant systems and win the $2 million prize money. The winning team CERBERUS has built on a team of robots including multiple ANYmals to set them apart from the competition in tackling the harsh underground environments. Learn from Prof. Dr. Marco Hutter about his team’s approach on how to win in one of the world’s hardest and most prestigious robotics challenges. 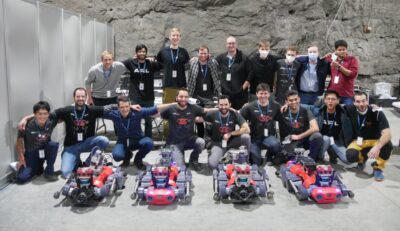 Prof. Dr. Marco Hutter (second person from the left) with the CERBERUS team and their fleet of ANYmal robots. Credits: CERBERUS team

Congratulations on reaching first place at the DARPA SubT Challenge! Before we talk about your team’s path of success, please tell us a bit about the goal and setup of the competition.

In the DARPA SubT Challenge, a team of robots was asked to autonomously explore diverse subterranean environments such as underground mines and tunnels, metropolitan subsurface infrastructure, and natural cave networks. The goal was to find various objects (“artifacts”) that were previously placed by the organizer. In this challenge, the robots have no prior knowledge about the environment. They must find and report the location of the found artifacts such as backpacks, cell phones, or survivors with high accuracy over hundreds of meters of underground area. After 3 years of preparation, with qualification rounds in a Tunnel and Urban Circuit, some of the best robotics teams around the world competed with their teams of robots in the Final Event. For this final competition, DARPA designed an environment involving branches representing all three challenges of the “Tunnel Circuit”, the “Urban Circuit”, and the “Cave Circuit”.

What were the main challenges in this work compared to more usual robotics deployments in industrial inspection or security patrolling?

First and foremost, the environment is completely unknown prior to the deployment of robots. It combined a manifold of challenges. Those are related to mobility (e.g., rough terrain, stairs, water), navigation (e.g., narrow passages, confined spaces, cliffs), mapping (e.g., self-similar structures, large scale caverns), localization (e.g., visually degraded conditions such as dense smoke), and communication. The robots had only one hour to explore as much of the underground area as possible to find the hidden artifacts. Since there is no communication infrastructure available, the robots had to explore autonomously. The option was to build up a wifi communication network by deploying communication beacons. And if this was not enough, the entire fleet of robots could only be commanded by a single operator who had to guide the deployment and supervise the automatic artifact reporting. 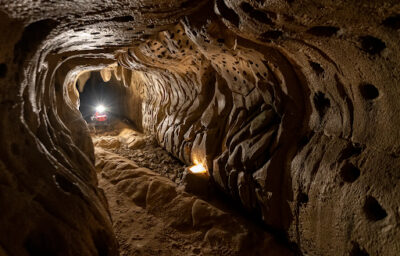 The SubT Challenge lasted over 3  years, what did your team focus on over this time, and what was your winning strategy?

The environment was extremely diverse and large in scale. Hence, we were convinced from the beginning that legged robots offered the best and most versatile solution. For this reason, the research of my lab was fully focused on preparing the ANYmal platforms for this mission. We worked on new locomotion control policies that can robustly overcome rough and slippery terrain while handling visually degenerated conditions (e.g., smoke as shown in the video below), on local navigation algorithms that can identify safe and efficient paths, and on a reliable localization and mapping framework that fuses multiple sensor modalities to cope with potential sensor degeneration. Furthermore, our partners at NTNU created an autonomous exploration methodology for global navigation, and partners at ETH Zurich realized a vision-based SLAM solution that allowed us to globally optimize maps over our fleet of robots.

In parallel, our partners in the team CERBERUS worked on different types of UAVs. While in principle being ready for the finals, the conditions with narrow space and degenerated perception did not favor the deployment of aerial vehicles.

You mention the importance of legged robots for the success of your team. Can you tell us more?

Legged robots bring together a unique set of advantages. In comparison to tracked or wheeled UGVs, they exhibit significantly better mobility. They are able to overcome rough terrain, stairs, and steps. They can move omnidirectionally, which is extremely helpful to navigate in narrow passages. In case they would fall, they can get up and continue operation by themselves. In contrast to UAVs, legged robots have significantly higher endurance. They can carry heavier sensory payloads for navigation and artifact inspection. Due to these advantages, the top six teams were all using legged robots. This shows the impressive advances that happened in this field over the last years.

Your team was working with 4 ANYmal robots. How did ANYmal support your work?

During the final mission, all four ANYmals were successfully, and to a large extent autonomously, operating for almost one hour in the tunnels, caves, and urban underground areas. The run was very smooth, none of the robots fell or had any hardware issues. This was a great demonstration of the robustness and reliability of this second latest generation of ANYmal robots. A big advantage was the full access to software and the modular payload capabilities of ANYmal. In contrast to our competitors, who put big backpacks on Boston Dynamic’s Spot to autonomously explore, map, and report artifacts, we could rely to a large extent on the standard ANYmal C platform with comparably small modifications. 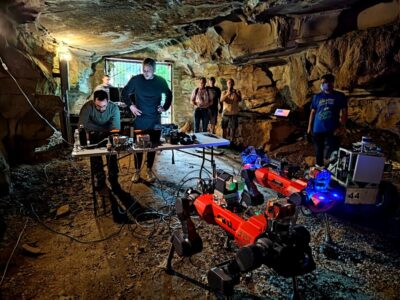 What is your future research emphasis and how will your team use the $2 million prize money?

The entire competition helped our team to advance the technology of autonomous legged locomotion, exploration, navigation, and mapping in a highly focused manner. I find the progress of all participating teams and the entire robotics field in only three years impressive. It indicates the potential of robotics for the near future. At the same time, we also learned about the limitations. For example, our systems had a very limited robot to robot communication and real-time information exchange. Moreover, all machines used during the competition were acting as pure observers. In the future, we will certainly invest some of the prize money for this. We will extend the capabilities of our robots to actively interact and intervene with their complex environment.

CERBERUS stands for CollaborativE walking & flying RoBots for autonomous ExploRation in Underground Settings. It is an international consortium involving the University of Nevada Reno (prime contract), ETH Zurich, Norwegian University of Science and Technology, University of California Berkeley, University of Oxford, Flyability, and Sierra Nevada Corporation. These partners have been collaborating within the ANYmal Research Community.

Behind the scenes: The locomotion controller that led to victory

During the Darpa SubTerranean Challenge, the CERBERUS team deployed a controller that combines fast locomotion and robustness in harsh terrain. This deep learning-based controller leverages real-time terrain information to plan the robot’s motion together with high-speed haptic reflexes. This enables ANYmal to operate successfully in difficult natural terrain including cases with impaired visibility. At the DARPA SubT challenge, ANYmal was able to walk through rocky and slippery surfaces, high steps, steep inclinations, and dense smoke without a single fall, helping CERBERUS take the lead position in the podium. Check how the team developed and tested the perceptive locomotion controller in this video: