Automation & Digitalization at Scale: ANYmal Makes the Case at BASF

ANYbotics’ collaboration with BASF, one of the largest global chemical manufacturers, displays the efficiency, quality, and scalability of robotic inspection and data-collection capabilities in complex industrial environments.

On production floors, robotics and manufacturing have gone hand-in-hand for decades. But on industrial plants, repetitive inspections, environment mapping, and efficiency analytics have mostly relied on manual work. These physical efforts impact economic sustainability, as well as process reliability and data quality. Fixed sensors and Internet-of-Things (IoT) devices are used to monitor critical processes. Still, these integrations lack scalability for multi-sensory inspection and monitoring with the full coverage of extended areas. ANYbotics has been working on a solution to apply the advanced industrial inspection capabilities of the autonomous legged robot ANYmal to bring complete visibility and higher-quality data collection to chemical processing plants. The result is a replicable model for cost-savings and improved data quality at scale through the merger of digitalization and autonomous mobile robotics.

BASF is a German-based multinational chemical company and one of the largest chemical producers in the world. The company has been in business since 1865 as they continue to invest in technological innovation to achieve high levels of quality. Digitalization is high on the agenda also in production plants, and robotic solutions play an important part. BASF Automation Manager Peter Welter coordinates cross-company efforts in robotics and mechatronics through partnerships and proof-of-concept testing. “Automation is definitely at the intersection of the digitization strategy. We are at the end of the implementation process, and robotics has made a huge contribution,” says Peter. Peter and his team are focused not just on how automation can save valuable time but also improve data quality through process repetition. About two years ago, ANYbotics caught Peter’s attention and since then, we’ve collaborated to bring this technology to a BASF plant in Ludwigshafen for testing. 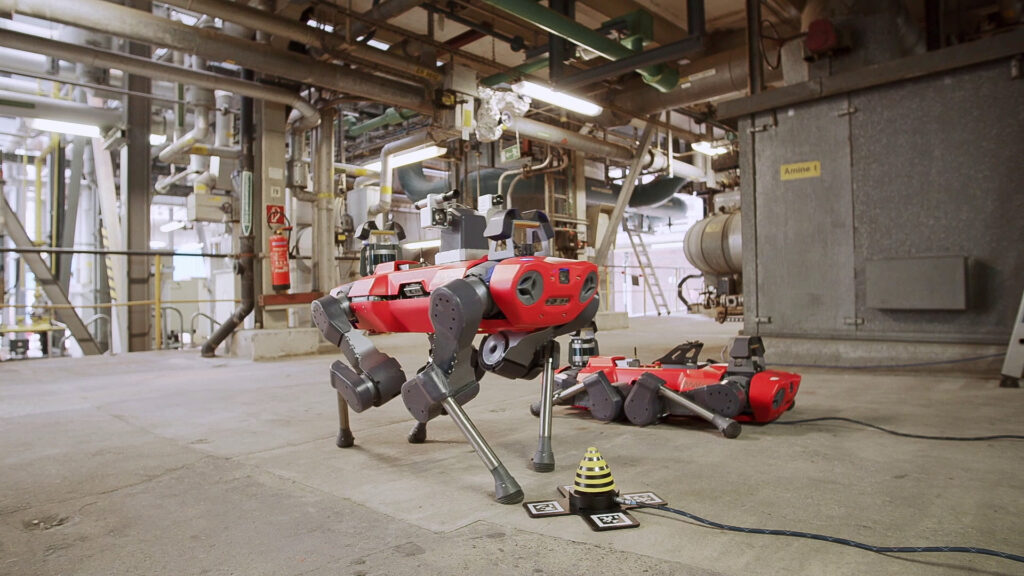 The ANYmal robots rest on a docking station until they are scheduled for a routine inspection or triggered manually. After up to two hours of operation, the robot self-navigates back to its docking station to recharge without any need for human intervention.

High-volume chemical manufacturing is one of the most complex industries, requiring massive infrastructure, advanced machinery, and rigorously detailed processes. BASF’s Ludwigshafen location alone extends over 10 square kilometers—the world’s largest integrated chemical complex. ANYbotics and BASF identified the autonomous legged robot’s promise to solve human mobility and data-collection challenges at such a large scale based on ANYmal’s customizable environmental data-collection capabilities. “We have here a highly heterogeneous environment that has been continuously growing for the past 150 years. A walking robot such as ANYmal fulfills one of the main requirements to navigate these complex environments with many steps and steep stairs”, says Peter. Together, the two organizations began testing the possibilities. 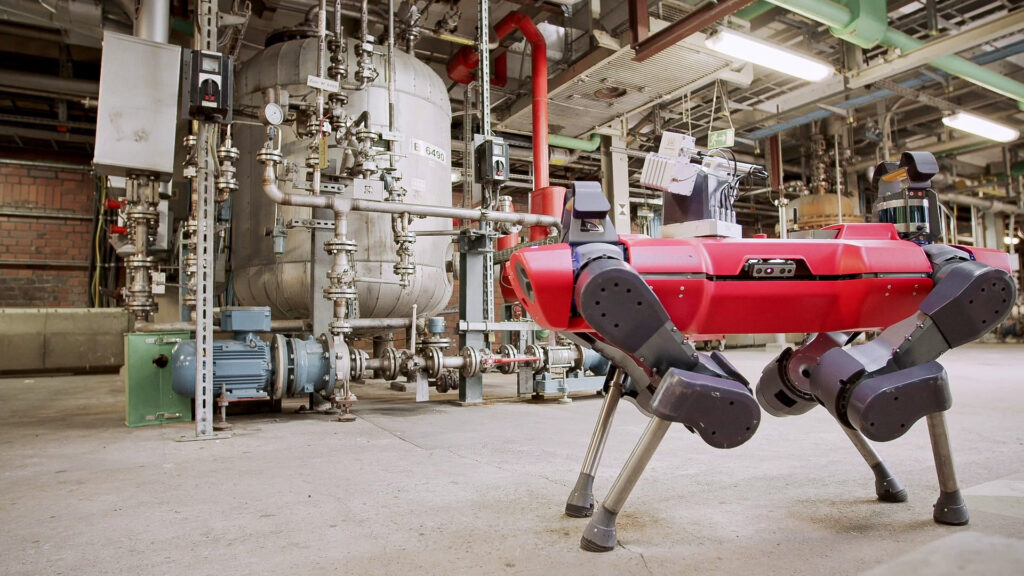 BASF had already begun investing in digitalization, having developed a detailed CAD model and a point cloud of one of the production plants for chemical intermediates at the Ludwigshafen site in Germany. At the ANYbotics lab, we used BASF’s environment map to simulate an autonomous inspection mission to verify the mobility through critical areas as well as the visibility of points of interest from the robot’s viewpoint. Using ANYbotics’ physics simulator, the team was able to efficiently perform the preparation work associated with mapping an environment, determining the paths, and optimizing the position of the docking stations. 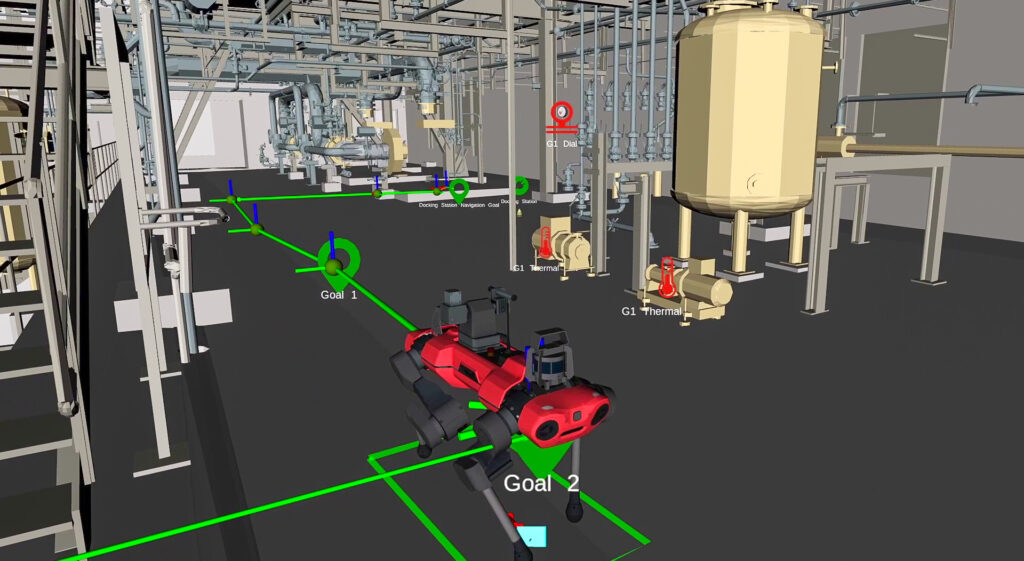 Validating the ANYmal’s capabilities in our simulated environment had the benefit of accelerating the on-site commissioning process. ANYmal was able to localize at BASF’s real facility using the digital twin data, a game-changer in terms of scalability, which would allow deploying the system efficiently across BASF’s hundreds of plants. Once ANYmal began traversing the diverse terrain of BASF’s facility, the autonomous legged robot was able to perform typical inspection tasks such as reading gauges, taking acoustic measurements of pumps and compressors, and checking the environment for hotspots using its integrated thermal camera.

The Asset Manager at the named production plant, Felix Volkmann’s charge is ensuring the efficiency, maintenance, and integrity of the plant’s infrastructure and machinery. For Felix, the collaboration with ANYbotics has the potential to improve essential data collection as well as human resource allocation. Felix explains, “With automation and robotics, we can increase the quality of the documentation of our assets by having clearly documented and easily accessible test reports via thermal imaging and sound recording, which can be collected daily so we can precisely track the history.”

BASF will further evaluate the possibilities of leveraging ANYmal for plant inspections due in no small part to our collaborative innovations in a remote virtual setup, saving valuable time and cost. Furthermore, the ability for ANYmal to successfully localize and navigate BASF’s complex industrial terrain while collecting visual, thermal, and auditory data offers various options for scaling the partnership between robotics and digitalization. “With this proof-of-concept, we show that the idea of a more digitalized plant can be further enhanced by robotics”, summarizes Peter.