ANYmal has successfully competed in a competition for autonomous robots for gas and oil sites. Credit: Benjamin Valette.

In the quest for an Autonomous Robot for Gas and Oil Sites, five teams competed in the ARGOS Challenge organized by Total and ANR. At the finals this year, the robots underwent six missions consisting of realistic operational situations on industrial sites. ANYmal has successfully completed a series of challenging tasks. These included fast and robust locomotion on the site over steps, obstacles, and stairs, automated docking, accurate localization and mapping, autonomous mission planning and decision making, and a series of challenging visual, thermal, and auditive inspection tasks. Throughout the challenge, ANYmal has proven its endurance and robustness by continuous multi-hour operation even under heavy water impact and occasional falls. 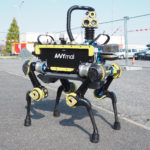 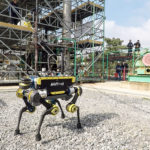 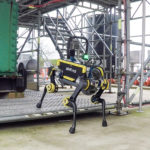 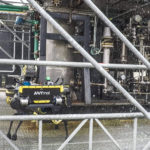 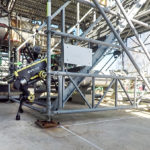 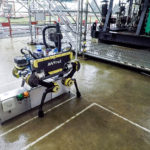 HANNOVER MESSE, 24–28 April 2017
Get to know ANYbotics at the world’s leading industrial fair in Hannover, Germany. Our booth will be located at the Swiss Pavilion in Hall 2, Stand C39.

ANYdrive-Based Mobile Manipulation at MBZIRC
At the MBZIRC the team from ASL and RSL used a mobile manipulator based on ANYdrives and won the second place in the grand challenge. Congratulations!